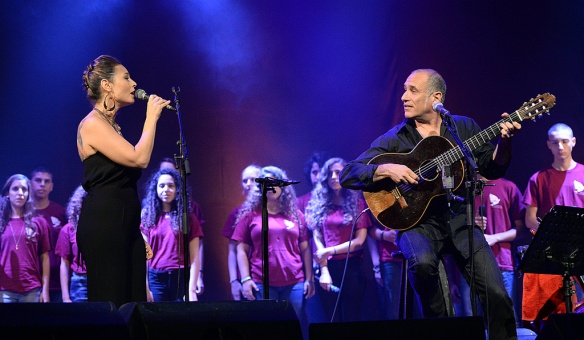 Yesterday evening singer-songwriter David Broza was in London. I was fortunate enough to be at an event where he spoke, and sang, and showed his film East Jerusalem, West Jerusalem, which documents the recording, over eight days in an East Jerusalem studio, of an album featuring Palestinian and Jewish Israeli musicians.

In his talk about the project David spoke about how important hope is. Once hope is replaced by the cynicism and despair so familiar in our times, he said, nothing is really possible any more. Cynicism closes off so many avenues that hope keeps open. And so hope, or a faith in our capacity to improve things, becomes a moral imperative, a necessary condition for the resolution of suffering and the solving of our most complex and confusing difficulties.

He also said something deep and important about time. Peace, he said, like so much that is important to us, requires a multi-generational commitment. We misunderstand it, as we do so much else, by insisting on immediacy, too quickly concluding that it is impossible because we’re not personally seeing the fruit of our labours. There is a significant kind of peace and understanding between people that can only be brought about by the diligent commitment of many over long periods. It requires persistence, and patience (surely in great decline in our current age), as well as the hope I described above. How many of us, I wonder, are willing to dedicate ourselves to anything big enough, and difficult enough, that it takes more than the span of our own short lives?

And he spoke, as did Du at our event last month about what it is to respond to a vocational call (though he did not use this word). The East Jerusalem, West Jerusalem project, he said, is but the latest expression of the one and only contribution he finds he can uniquely make, given who he is, when in history he is living, and what he loves. It’s clear from being with him and listening to him play that this is not so much a choice he is making as a call that life is making on him – where his heart’s particular longing and gladness meets the particular troubles of the world in which he lives. And in responding to life’s call his part is not to make grand political gestures, but to be in close, in intimate relationship with others, making music and inviting the humanity of close-in relationship and singing about what he uniquely sees and what uniquely moves him.

And what beauty it brings about, as you’ll see if you have an opportunity some day to watch the full film, which as yet does not have a distributor.

There’s a film of David Broza speaking recently at a TEDx conference in Jerusalem which you can see here. I strongly recommend watching at least the first few minutes in which he plays and sings one of the central songs of the project. And if you’re prepared to dedicate a few more minutes of your time, you might find something of what I’m saying above in what he has to say.

Here’s a video of the title track from the album, recorded with Wyclef Jean.